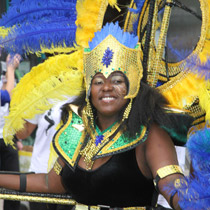 The Nottingham Caribbean Carnival went ahead on Sunday 14th August 2011 and was a huge success. The event, organised by Tuntum and a host of volunteers, involved hundreds of young people from our city and wider region, who had spent months working on costumes and routines for the BIG parade. This year’s parade had a new route, taking in more of the city centre and attracting massive crowds.

At the carnival site at Forest Recreation Ground, there were numerous stalls selling world foods, arts & crafts, information stands, a fantastic fun fair, quad bikes, giant inflatables and water zorbs for the children, all of which contributed to the party atmosphere. The main stage had live music throughout the day from local, national and international acts, headlined in the evening by Ken Boothe.

Despite being a one day event this year and the issues the previous week with the rioting across the country, the carnival was still a massive success enjoyed by all.

Chief Inspector Linda McCarthy praised the success of the event:

“The carnival’s significance as a focus for community cohesion was all the more important in light of the disorder in Nottingham last week. 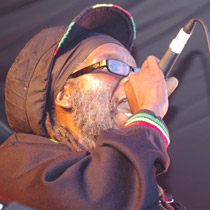 “The carnival was amazing and there was a lovely family atmosphere throughout the day. So much effort had gone into the event – the costumes, the floats, the food and the music. And the sun was shining too.

“People had been preparing all year for the event and I know just how determined the participants, the organisers and the public were for it to go ahead and not let the actions of a tiny minority last week put paid to all the hard work.

“We opted for a low-key policing approach and it was a great opportunity for our neighbourhood policing teams to engage with the public.

“Real credit must go to the organisers for making it happen and for working with us to ensure the event was as safe and incident-free as it could be.

“It has become a mainstay of Nottingham’s cultural life and is an event the whole city can be proud of.”

“The Caribbean Carnival is an example of how Nottingham’s people and communities come together to support big events like the Mela, the Riverside Festival, Pride and Splendour – all of which have been massively successful once again this year.

“A big thank you and congratulations to the organisers, partners, police and everyone involved in supporting this year’s carnival making it such a great success again. The fact that this great event went ahead without incident at the end of a difficult week shows Nottingham at its best and is what this city is really all about.”

A huge thank you goes out from Richard Renwick MBE, Chief Executive of Tuntum and Chair of the Carnival Organising Committee, to all those who took part and volunteered and made the carnival the on-going success that it is