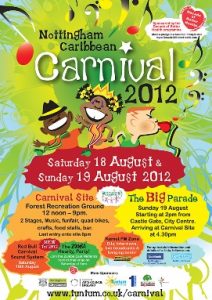 Soaking up the Carnival Atmosphere

THOUSANDS soaked up the carnival atmosphere at The Forest recreation ground over the weekend.

The Nottingham Caribbean Carnival was back, bringing with it music, dancing, spectacular costumes and mouthwatering Caribbean cuisine.

Yesterday, the Big Parade – made up of hundreds of performers in elaborate costumes – travelled from Castle Gate, in the city centre, to The Forest.

Dressed as everything from sunflowers to pharaohs, with many in feathered headdresses, people of all ages then made their way on to the stage at the park to perform choreographed routines.

Olivia Francis, 14, of Bulwell, took part in the parade.

She was one of around 20 performers who were part of the section organised by the Tuntum Housing Association, with the theme of Queen Cleopatra.

“This is my fourth time doing it,” said Olivia, who was dressed as an Egyptian. “I like it because it is different and it’s fun. My favourite thing about the carnival is the atmosphere – everything is really great.”

It was eight-year-old Chantae Smith’s first time in the parade. From Bulwell, and dressed as an Egyptian, she said: “It was a bit scary but it was lots of fun. We had to learn some dance moves and my favourite bit was when we started to dance.”

As well as the parade, there was music from community radio station Kemet FM and live performances by artists including Barry Biggs, the Abelwell Foundation and Frankie Paul – with acts performing everything from gospel to reggae and drum and bass.

There were fairground rides, bouncy castles, and stalls selling Caribbean food and whistles and flags to help people get in the party spirit.

The carnival is organised by Tuntum Housing Association, The Arts Council of England, Nottingham City Council and main sponsor the Decade of Better Health, and has been running since 1999.

Samuel Nelson, director of the Real Deal Comedy Jam, had a stall promoting the group’s upcoming performance at Jongleurs in Nottingham, on August 23.

Mr Nelson, 34, said: “I’ve been to the carnival a few times and I think it is a great thing for the community.

“There’s a really cosmopolitan feel to it and everybody is always really up for it.”

Among those enjoying the carnival was Sarah Ealing, 34, of Mapperley with her sons Tom, four, and Josh, two.

She said: “It was a lovely day so we thought we’d come out and experience it.

“The boys love all the rides and have been dancing along to the music, and I thought the parade was incredible.

“The costumes were amazing and it is all so colourful.

“I think it’s great that we have something like this in Nottingham.”